When a Blogger Voices Approval, a Sponsor May Be Lurking. 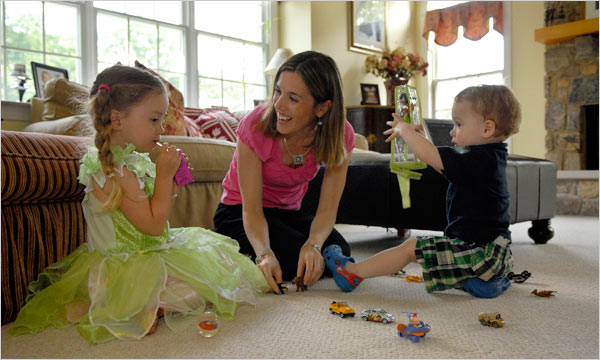 Mike Mergen for The New York Times
By PRADNYA JOSHI

Colleen Padilla, a 33-year-old mother of two who lives in suburban Philadelphia, has reviewed nearly 1,500 products, including baby clothes, microwave dinners and the Nintendo Wii, on her popular Web site Classymommy.com. Her site attracts 60,000 unique visitors every month, and Ms. Padilla attracts something else: free items from companies eager to promote their products to her readers.

Marketing companies are keen to get their products into the hands of so-called influencers who have loyal online followings because the opinions of such consumers help products stand out amid the clutter, particularly in social media.

“You can’t really write a review if you haven’t used it or done it,” Ms. Padilla said. “It really is a valuable thing for marketers. It’s a real mom with a real voice.”

Ms. Padilla typically acknowledges in each review which products were sent to her by companies and which items she bought herself. Other items on her site include her own videos for brands like Healthy Choice, which she labels as sponsored posts. But unlike postings in most journalism outlets or independent review sites, most companies can be assured that there will not be a negative review: if she does not like a product, she simply does not post anything about it.

The proliferation of paid sponsorships online has not been without controversy. Some in the online world deride the actions as kickbacks. Others also question the legitimacy of bloggers’ opinions, even when the commercial relationships are clearly outlined to readers.

And the Federal Trade Commission is taking a hard look at such practices and may soon require online media to comply with disclosure rules under its truth-in-advertising guidelines.

A draft of the new rules was posted for public comments this year and the staff is to make a formal recommendation to be presented to the commissioners for a vote, perhaps by early fall.

“Consumers have a right to know when they’re being pitched a product,” said Richard Cleland, an assistant director at the Federal Trade Commission.

Yet in many ways, the hypercommercialism of the Web is changing too quickly for consumers and regulators to keep up. Product placements are landing on so-called status updates on Facebook, companies are sponsoring messages on Twitter and bloggers are defining their own parameters of what constitutes independent work versus advertising.

TNT, for instance, is experimenting with a paid relationship with a popular blogger, Melanie Notkin, founder and chief executive of SavvyAuntie.com, a site that has carved out a demographic niche of professional aunts without children.

Ms. Notkin is sending out several messages to her more than 10,000 Twitter followers on Tuesday nights, when a new episode of “Saving Grace” is shown.

Ms. Notkin declined to disclose how much she is paid by TNT, only saying that she is “well compensated.” But she says she is upfront with her readers about the relationship with the network by labeling every commercial tweet with “[sp],” which stands for sponsored post.

“TNT never told me and will never tell me what to say,” Ms. Notkin stressed. “They want to associate with brands that people trust.”

For some bloggers, product sponsorships have become a lucrative side business. Drew Bennett of North Attleboro, Mass., began a photo-a-day blog more than four years ago and was one of the early participants in the site PayPerPost.com in 2006 and later, its sister network SocialSpark.

In three years, Mr. Bennett has written more than 600 posts for companies including Blockbuster and Xshot, a telescopic camera extender, typically making $5.35 to $10 a post. Through some arrangements, he says, he earns 11 cents to 68 cents every time a reader clicks from his site to a corporate site that sells the product.

“You can gain a whole different audience with social media,” said Mr. Bennett, who runs BenSpark.com and other sites. Mr. Bennett is also making money by recruiting and teaching other bloggers how to optimize their sites.

Izea, an online marketing company based in Orlando, Fla., which created PayPerPost, says it has 25,000 active advertisers ranging from Sea World to small online retailers. It feeds to 265,000 bloggers in its network, and pays, on average, $34 a post.

“Our focus has always been sponsored conversations,” said Ted Murphy, founder and chief executive of Izea.

Within the next few weeks, Izea plans to introduce another way to outreach to consumers — a “Sponsored Tweets” platform for Twitter users to blast promotional messages to their followers.

A campaign that Izea conducted in December for Kmart generated 800 blog posts and 3,200 Twitter messages that reached 2.5 million people over 30 days, Mr. Murphy said. In the campaign, six popular bloggers known to be influencers were given $500 gift cards to shop at the discount chain and asked to write about their experiences.

Many of these marketing practices have created gray areas as to what constitutes advertising versus consumer outreach. For instance, an expensive gadget in short supply in the hands of influential bloggers could be worth a lot more intangibly than a cash payment of, say, $50 a post.

Mr. Cleland said that the F.T.C. would most likely not spell out the disclosure requirements but instead would rely on Internet users to judge what constitutes fair disclosure, adding that a lengthy description written in legalese would probably be counterproductive.

At the same time, the marketing industry has also been revising its guidelines. The Word of Mouth Marketing Association’s ethics code says that manufacturers should not pay cash to consumers to make recommendations or endorsements, but it is evaluating how companies should handle disclosures of product giveaways to bloggers.

“I’m actually thrilled that the F.T.C. is looking hard at the issue,” said Paul Rand, president-elect of the association, a trade group representing 400 companies.

For many bloggers, commercial messages are often integrated into their missions. Katja Presnal, who created the Skimbaco Lifestyle and Skimbaco Home blog, recently wrote about e.l.f. cosmetics after meeting its chief marketing officer at a conference. The company has since provided her with products for giveaway bags for events she has hosted and has asked her to provide testimonials for an online video, all of which she did free.

Mrs. Presnal, who has more than 14,000 followers on Twitter, says that while she is paid fees for a few blog posts, she does not always accept endorsement deals.

“There is this misconception that bloggers write product reviews to get free stuff,” said Mrs. Presnal, a mother of three who lives in upstate New York. “I don’t blog about a product if I don’t really like it.”

In March, Better Homes and Gardens gave her a $500 gift certificate to do a bedroom makeover in her house using its new line of home furnishings bearing the magazine’s name. She also received a fee for providing a review to BetterHomesandGardens.com.

When Ford Motor flew her to Detroit this year for a test drive of the Fusion hybrid, she says, she expressed her true assessment on her blog, saying that she thought the vehicle would work for a family with teenagers, but would not fit the needs of her three children and a dog.

“I still wrote my honest opinion,” said Mrs. Presnal, who did not receive a fee from Ford, but had her travel expenses paid. “If you don’t, in the long it’s going hurt your credibility.”

Still, the encroachment of commercialism into new-media formats worries some consumer advocates. Many forms of online word-of-mouth marketing depend on the perception of unsolicited or personal opinions, said Robert Weissman, managing director of the advocacy group Commercial Alert.

“It’s a contrast to the Tupperware model, where everyone knows what’s going on, and no one’s trying to be deceiving,” said Mr. Weissman, whose group favors stricter oversight of marketing practices.

The Future of #ContentMarketing: Trends and Predictions for 2014 →