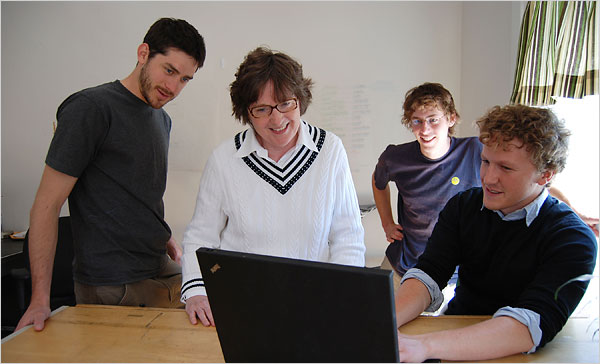 Now, the Internet is starting to upend those long-established methods; online networking on Facebook, Twitter, LinkedIn and newer niche sites can be instantaneous and far-reaching.

The sites are efficient and free, which is especially important in an economic downturn, as owners scramble for new customers, said Rob King, vice president for strategic marketing at Sage North America, a unit of Sage P.L.C., a global supplier of business management software and services.

Fast, free and efficient — those attributes appealed to Brighter Planet, a socially responsible start-up based in Vermont, which built social networking into its DNA.

“There’s almost a grass-roots quality to it,” said Patti Prairie, its chief executive. “As a start-up, we can’t afford to be buying ads anywhere. We have to use our outreach.”

For more than a year, the Brighter Planet team has been blogging, Tweeting, friending on Facebook and initiating viral marketing campaigns intended to help consumers reduce their carbon footprints.

While most small businesses have not yet embraced social networks as Brighter Planet has, their numbers are growing. According to the April index of Discover Small Business Watch, compiled by Discover Financial Services, 38 percent of owners were a member of an online social networking community, up from 22 percent in October 2007.

Charles H. Matthews, president of the International Council for Small Business, said the key was to view the sites as tools, not toys. “It can certainly help enhance the process of identifying customers, especially in niche markets.”

For Brighter Planet, the niche is the environment. Before Earth Day, for example, it sponsored Earthtweet, an Earth Day Tweet-a-Thon, which has generated 4,200 conservation Tweets and 2,500 followers.

Soon, BrighterPlanet.com will feature a portable social Web application that will allow visitors to calculate the status of their carbon footprints and share what they are doing on conservation on other social platforms like Facebook.

Friends, family and colleagues can immediately see how saving the environment is important to BrighterPlanet members, Ms. Prairie said. “That’s what we find is the beauty of social networking, particularly for environmental-type causes.”

A recent study for Sage North America found that 65 percent of small businesses that used social networking sites said that they felt more comfortable doing so this year than they did last year, and 51 percent said that they had acquired and retained customers because of it.

In April, Sage, which has 2.9 million small and midsize business customers, introduced its own networking site, SageSpark .com. “We know we’re not the first to the game,” Mr. King said. “Our twist really is the community, tools and services.”

“We want you to spend with small businesses,” Ms. Pham said. “By doing so, 80 percent of the money goes directly back to the community.”

The site is arranged so owners can create virtual storefronts with photos, video, blogs and store information, and communicate with customers.

“Shustir gives consumers a one-stop destination,” Ms. Kim said, where they can buy from trusted businesses, post about their favorite shops and make recommendations.

Businesses can exchange advice, ideas and information, and network on a site that provides them search optimization.

In its second phase, Shustir will add Facebook and Twitter badges so owners can use other social media to build business. There will also be a shared community calendar. “The call to localism is existing across the country,” Ms. Pham said, “because small business is suffering.”

PartnerUp has been around longer. It is a social networking site that helps entrepreneurs and small-businesses owners find partners or co-founders, network, ask for and offer up advice, find resources and create or join groups based on their interests. It was founded in 2005 and acquired by the Deluxe Corporation in 2008.

PartnerUp has more than 100,000 active members, and more than 300,000 unique business owners and entrepreneurs come to the site every month, according to Steve Nielsen, its president.

“We’re at an inflection point now,” Mr. Nielsen said, “where social media sites that are specific to a purpose for a market are going mainstream, and they’re not just for early adopters any more.”

In late 2007, David Reinke joined PartnerUp for a specific purpose. He had quit corporate America to start a fashion rating Web site, StyleHop.com, but needed a partner well versed in technology. He posted a profile on PartnerUp, and a job description for a chief technology officer and said, “Let’s see what happens.”

About a month later, Froilan Mendoza, who had 12 years experience building technology start-ups, contacted him and after a series of discussions, Mr. Mendoza quit his job to become chief technology officer of StyleHop.com.

Turning to PartnerUp, Mr. Reinke said, was consistent with how he uses online sites. “I was looking for something specific. I go to the source where the experts are,” Mr. Reinke said. PartnerUp also allowed for a quiet search and limited exposure, he added, so thousands of people would not know about his start-up.

To be sure, the majority of smaller concerns have not caught the online wave. In its monthly index, Discover noted that 62 percent of businesses still do not have Web sites.

What’s more, when asked which networking opportunities they used most, 46 percent of small-business owners identified traditional methods like conferences, trade shows, local in-person groups or chambers of commerce. Of the remaining respondents, 16 percent cited “other” networking opportunities, 8 percent cited online sites, 7 percent said e-mail messages and 22 percent said they were not sure.

Mr. King of Sage North America estimates that small businesses have a 12-month window to figure out online social networking. “I hate to say it, but if they don’t, they’ll get left in the dust,” he said. “It’s here to stay.

The Future of #ContentMarketing: Trends and Predictions for 2014 →