Google Makes a Case That It Isn’t So Big. 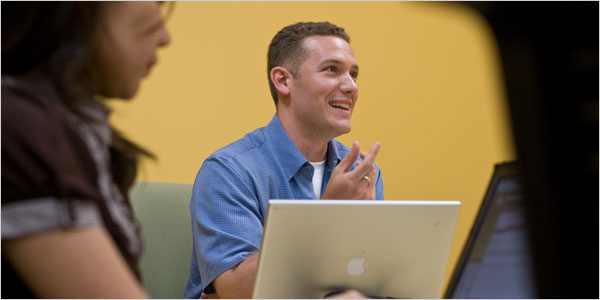 SAN FRANCISCO — Google handles roughly two-thirds of all Internet searches. It owns the largest online video site, YouTube, which is more than 10 times more popular than its nearest competitor. And last year, Google sold nearly $22 billion in advertising, more than any media company in the world.

With all those riches and more, how is Google a relatively small company, one that is vulnerable to competition and whose luck could turn any day?

Dana Wagner is happy to explain.

Mr. Wagner, who is Google’s “senior competition counsel,” faces the Sisyphean task of convincing the world that his employer is not unassailable.

“Competition is a click away,” Mr. Wagner says. It’s part of a stump speech he has given in Silicon Valley, New York and Washington for the last few months to reporters, legal scholars, Congressional staff members, industry groups and anybody else who might influence public opinion about Google.

“We are in an industry that is subject to disruption and we can’t take anything for granted,” he adds.

Google has begun this public-relations offensive because it is in the midst of a treacherous rite of passage for powerful technology companies — regulators are intensely scrutinizing its every move, as they once did with AT&T, I.B.M., Intel and Microsoft. Some analysts say that government opposition, here or in Europe, could pose the biggest threat to Google’s continued success.

The Justice Department derailed an important partnership between Google and Yahoo in November because of concerns it would cement Google’s dominance and reduce competition. And Google now faces three new government antitrust investigations.

The Justice Department is examining the hiring practices at Google and other technology companies, and it is investigating a class-action settlement between Google and groups representing authors and publishers. The Federal Trade Commission is looking into ties between the boards of Google and Apple.

None of the investigations take aim at Google’s core advertising business. And unlike other technology giants in years past, Google has not been accused of anticompetitive tactics. But the investigations and carping from competitors and critics have Google fighting to dispel the notion that it has a lock on its market, even as it increases its share of search and online advertising.

Eyes are rolling, especially in reaction to the idea that Google is a relatively small player in a giant market. “They describe where they are in a market under a kind of a fairy-tale spun gloss that doesn’t reflect their dominance of key sectors,” said Jeff Chester, executive director of the Center for Digital Democracy. “Google search is an absolute must-have for every marketer in the world.”

Microsoft declines to comment on its archrival’s efforts. But during Mr. Wagner’s presentation to journalists in San Francisco this month, Microsoft P.R. handlers, who had learned the gist of the presentation, were e-mailing reporters offering rebuttals of Google’s arguments. Mr. Wagner faced a barrage of pointed questions.

Hand-wringing over Google’s power is not new. But some experts say that the steady stream of headlines about antitrust investigations could tarnish Google’s image with consumers, who by and large still view the company, and its growing list of free and innovative online services, positively.

“No company, whether it is Google, Microsoft or anyone else, wants to be portrayed in a negative way,” said David B. Yoffie, a professor at Harvard Business School. “It is absolutely right for Google to be worried, to be prepared, to be paranoid and to respond accordingly.”

Kent Walker, Google’s general counsel, said the company expected its success would lead to greater scrutiny of its actions.

“The goal isn’t charm so much as it is explaining our business,” he said. “We think we have a great story to tell.”

The task of telling that story has fallen, in part, to the boyish, 33-year-old Mr. Wagner, a former antitrust lawyer at the Justice Department who drops words like “goofy” and “wacky” with an aw-shucks grin into discussions of complex legal and economic issues. In contrast to Microsoft a decade ago, whose executives would rarely hide their disdain for regulators, Mr. Wagner speaks of his former colleagues at the Justice Department in deferential tones.

Mr. Wagner’s job has not been easy. The slides he uses in his presentations have been circulating long enough that Consumer Watchdog, an advocacy group that is critical of Google, has posted an annotated version of them that disputes nearly every one of Google’s assertions

For example, on a slide that cites a public policy group’s praising Google for some of its practices to protect users’ privacy, it points to four other groups that have criticized the company for collecting immense amounts of data about consumers.

Mr. Wagner, not surprisingly, takes issue with the image of Google as unshakable monopoly. Google achieved its market position by offering superior products and could quickly be dethroned if it stops innovating, he said.

And unlike companies that dominated other eras of computing, Google makes it easy for its customers to switch to rival products.

Central to Mr. Wagner’s case is the argument that Google is a relatively small player in a vast market where its rivals are not just other search engines or even other Web sites. Google says it is competing for users against sites as diverse as Amazon, WebMD and Wikipedia. And Google is competing for ad dollars with television, radio, print publications, bus stop benches and milk cartons.

Gregory L. Rosston, an economist at Stanford who has heard Mr. Wagner’s arguments, said others who faced antitrust woes had made similar arguments without success.

“When parties have tried to make the argument that television, newspapers and billboards are part of the same relevant advertising market as radio, that hasn’t flown with the Justice Department or the courts,” Mr. Rosston said. “That said, the Internet has changed things and they may be able to make that argument now.”

The timing of Google’s tussles with the government has surprised some analysts because the company and its executives are close to the Obama administration.

Eric E. Schmidt, Google’s chief executive, campaigned for Mr. Obama, advised the transition team and now sits on the president’s council of advisers on science and technology. Some former Google employees have taken influential posts in the administration.

Those ties have not helped Google with regulators, at least not so far. Yet they provide another source of concern for Google’s critics, who fear that the company may gain undue influence over important policy areas like online privacy regulation.

Mr. Wagner says that some of Google’s rivals, like Microsoft or AT&T, are not only much larger than Google but also spend far more on lobbying than it does.

While the industry is volatile and competitive, Mr. Wagner said he was gratified by Google’s success.

“We know we have a lot of people doing searches and we are very proud of that,” he says. “We are not asking for sympathy.”