LONDON – Brands spend millions on advertising and branding exercises, but these will fall flat if the products being promoted are not in the shops. Marketing looks at how field marketers have risen to the challenge 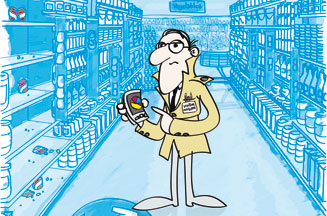 Stock availability is a huge issue for FMCG companies, which need to make regular visits to retailers to ensure their products are both visible and accessible. Indeed, research by IGD shows that 18% of shoppers will buy a different brand if the one they want is not on the shelf.

If this happens, it is not just the individual purchase that is lost. A new mother may go into a shop intending to buy Huggies nappies because that is the brand her friends use. If there are no packs of Huggies left, she may buy Pampers instead – and conti-nue to use them. The lifetime value of that missed purchase could be thousands of pounds.

With up to 37% of shoppers willing to look elsewhere to find what they want, having the right products is also in retailers’ interests. Tesco chairman Sir Terry Leahy credited better on-shelf availability with helping to boost his stores’ sales by nearly 10% in 2008.

Brands rely on field marketers to sort out any problems, but with more than 6000 supermarkets in the UK – and a total of 100,000 food and grocery shops overall – they have to prioritise their visits.

Astonishingly, this has only recently been done in any kind of methodical fashion: as little as five years ago sales and merchand-ising teams were often still trying to provide blanket coverage.

What has changed is the arrival of electronic point of sale (EPOS) till data, which supermarkets now make available to brands. Field marketers analyse this data to see which stores are short of which products.

Instead of working through an entire call-list on spec, they can then go where they know their efforts will bring the greatest return, enabling their clients to squeeze the most from their field-sales budgets.

Coca-Cola is a major user of this data, as is Kimberly-Clark, which owns brands such as Andrex toilet paper – a product that can quickly go out of stock due to the fact it is so bulky. Heinz, too, monitors levels of all its products in supermarkets.

‘We calculate the likely return for each individual store, so that field teams can be in the right one at the right time, and resolve the issues that will make the most differ-ence,’ says Jemma Blaylock, head of retail execution at Heinz.
She also points out that an important advantage of this sort of activity is that it boosts the brand’s credibility at a local level. Store managers respond positively to action plans that are based on prior insights specific to their outlet, as opposed to general initiatives. The result has been significant improvements to Heinz’s stock availability.

‘Field marketing is changing, as clients demand more for less,’ says Chris Howarth, managing director of Retail Insight, which has been aiding both Heinz and Kimberly-Clark. He argues that the most successful agencies, with the most satisfied clients, are those applying data to their call plans and undertaking store-specific action plans.

These developments are not only affecting supermarkets. Wholesalers, such as Booker, which supplies food and drink to 400,000 outlets, are providing information on independent retailers. The company passes this to sales data analysts SalesOut, which turns it into actionable insights for the benefit of FMCG brands.

This new sales intelligence is essential for brands to identify distribution gaps and gain promotional success in independent stores. According to SalesOut chief executive Marcus Vallance, this gives them a chance to offset diminishing returns from the multiples.

Another, more recent, trend is for agencies to gather data on the extent to which individual stores are influenced by
their visits. Those that respond well to merchandising and promotional activity are clearly worth spending more on than those which, according to experience, will quickly revert to their old habits.

Segmenting outlets
Applying this insight paid dividends for Colgate Palmolive, which needed to address poor take-up of its promotions, but was unwilling to throw resources at the problem without being sure of achieving
a positive result.

Field marketing agency IMS therefore grouped stores into seven segments, according to how well or poorly they complied with promotional and stock-level agreements. The weakest performers were targeted with four visits while the strongest received none.

The best results were achieved by the middling stores, which received two visits and improved 38% above expectation.
Clearly, this approach avoids time and resources being wasted on stores that are unlikely to change their behaviour. ‘For clients with a limited budget, such stores are better to avoid,’ says IMS operations director Steve Radford.

This ‘influence’ data is also of significant interest to customer contact company CPM, which has been closely monitoring how many of the changes it makes in a particular store are still in place when it returns for a check-up weeks or months later.

According to CPM’s insight director, Stephen Bisset, a call-list is typically divided into 10 segments, consisting of habitually good performers, those that are marginal or underperforming, and those that are consistently poor.
Of these, the good ones can get by with light monitoring, while most of the resources are focused on the middling ones that have the greatest potential for improvement.

The poor ones are best avoided altogether, as they are unlikely to repay the investment. ‘There are some retailers out there that are not much good, and whatever you do with them, you can never change their habits, so you end up wasting money,’ says Bisset.

This sort of information is relatively easy to gather because an agency will typically be dealing with a retail outlet for several different clients, and the various details can be aggregated. Bisset stresses that client data is never shared, and that the teams handling each one operate separately. However, certain aspects of the data can be made anonymous and used for the benefit of all clients, without breaching confidentiality.

Having done this, the agency can start to build up a deeper profile of clients’ products to see how stores’ compliance levels change over time. The approach is the same as that applied in the consumer space, where data is used to help build a picture of purchasing behaviour.

Agency FDS Field Marketing has recently carried out a similar grading exercise, rating its retail outlets in terms of compliance and stock levels on a core range of products. Those that score well can go onto an eight-week call cycle instead of four weeks, without jeopardising the level of retention.

The agency has been using this technique successfully for brands such as Danone Waters, visiting up to 40% more stores for a client’s budget.

‘The climate has changed a lot, and it’s more important than ever for clients to be sure that any activity is working,’ says the agency’s managing director, Karen Battrick.

‘It’s easy for a field marketing company to take the client’s money and just make regular courtesy calls to stores,’ she continues. ‘However, avoiding those that aren’t really needed makes it easier to get extra sales and good return on investment. So we are trying to be more flexible and dynamic.’

Applying consumer data
Consumer data of the kind routinely used by brands in direct marketing channels might seem to have less application for activity directed at retailers. However, field marketers are also starting to use information on shopper behaviour and demographics to inform their decisions.

In a recent campaign for a games manufacturer, field marketing agency Reach used geo-demographic information to identify shops that supplied, not just the core youth market, but also the kind of people who might buy games as Christmas presents. Outlets where there was a high concentration of such individuals were then targeted with visits.
Reach managing director Gary Mac Manus acknowledges that the EPOS data represents a major advance as, before this became available, field marketers had little more to go on than details of retail outlets’ characteristics. Nonetheless, he believes this third kind of information has increased their power.

‘The combination of all three will not only tell you the right store to go to but also what is the right activity, frequency and time of call,’ he says. ‘This is well ahead of where we were less than five years ago and now drives everything we do.’
CPM is also starting to factor shopper insight into the equation. According to Bisset, knowing what consumers are looking for in different types of stores is immensely useful.

‘Many clients have vast amounts of relevant data, but struggle when it comes to applying it at individual store level. They know that 20% of stores are of one kind, and 15% another, but don’t know which is which,’ he says. ‘We look at how their planning works and what they are trying to achieve, and lay that over our database in order to build a specific picture.’
If field marketers have taken somewhat longer than other disciplines to use data, that may be because of the challenge of finding retailer information of comparable detail.

Now that intelligence is readily available, it is becoming second nature for agencies to use data insights as a means to make clients’ budgets go further and, ultimately, have a positive impact their bottom line.

Case Study: Kimberly-Clark
Bulky and quick-selling items are a particular challenge when it comes to maintaining stock levels. This applies to Kimberly-Clark’s key brands Andrex, Kleenex and Huggies.

To help improve store availability in supermarkets, Kimberly-Clark has been using insights derived from EPOS till data provided by agency Retail Insight.

The data is used to determine which stores are running out of stock and when. This is particularly useful with Andrex, which often sells out. Another problem arises when, for whatever reason, a store’s system registers plenty of stock when in reality there is none.

‘This insight means we are calling on the right stores and doing the right things to improve sales,’ says Steve Lane, head of category management at Kimberly-Clark. He says the effect has been a 3%-4% improvement in stock availability.
The company is also using Retail Insight to drive take-up of promotions in stores, and address issues as they arise.

Case Study: Coca-Cola
Coca-Cola Enterprises has long recognised the importance of its prominent displays in supermarkets and other grocery and drinks outlets, as a means to retaining supremacy in the soft-drinks market.

The company needs to ensure that the right items are available in the right places, with products readily accessible throughout the day. This also helps to maintain consistency in its branding.

Last year, it embarked on a major data-gathering initiative to underpin its merchandising activity in retail outlets. This combined inputs from several existing data sources with new research to produce a comprehensive outlet database, overlaid with a wealth of information about each one’s characteristics.

‘This insight has helped us identify outlets with the most potential for both regular coverage and NPD launches,’ says Simon Miles, the company’s head of intelligence and planning. ‘We’re already working differently as a result, and have plans to use it in several future activities.’

THESE ARE THE BIGGEST WORK CHALLENGES FOR WOMEN AROUND THE WORLD →

Digital Marketing Tips: Do You Have a Traffic Problem or a Conversion Problem…? →