2009 has been a busy year for Facebook. The social networking service just reached a whopping 350 million users. It redesigned its site, then redesigned those redesigns (say that three times fast). And as Mark Zuckerberg, the site’s founder and chief executive, announced Tuesday, the company is getting ready to release a new set of privacy policies in the coming weeks. 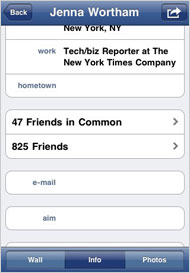 Facebook has also been on the receiving end of some heavy criticism this year for an array of privacy issues and a perceived desire to look and act more like Twitter. Some of these concerns are valid, and some are just the growing pains of a five-year-old company in a market that continues to change and adapt at breakneck speeds.

All of that aside for a moment, I believe that Facebook has one important, underutilized feature that no other site can replicate or compete with: the “mutual friends” list.

When you go to an individual’s Facebook page, the list sits in a little box on the left of the page, visually displaying who you know in common. For me, this often-overlooked feature has become an integral part of my Facebook experience. Sure, I still go to the site to update my status and peruse my news feeds, but I use Mutual Friends more than anything else.

This feature enables me to supplement the real world with additional digital information. When I go to a meeting or party, I take a minute to look up who’s attending and quickly explore friends we might share. It’s the perfect digital icebreaker. Increasingly, when I go to a conference and meet someone new, I’ll sneak into the hallway and look them up, too. Or, if they seem unencumbered by potential privacy concerns, we pull out our phones, and using Facebook’s mobile application, look each other up.

Last year, for example, I met Wired columnist Steven Levy at a conference in Boston. After a few minutes chatting about mundane tech stories, we quickly pulled out our laptops, zipped along to Facebook.com and sat for an hour discussing who we knew in common.

Of course, the “mutual friends” list has its drawbacks. Maybe I don’t want you to know we are both friends with the same political activist. Then there are the random acquaintances you’ve collected over the years — they’re not really friends, even though they send you messages that say “Hi, we have 10 friends in common so we must be friends!”

Still, for me, the Mutual Friends list has become an integral part of my digital life.

And five years after the site’s launch, this feature is something only Facebook really offers. It would be close to impossible for Twitter to do, since its service is built on a find-and-follow mentality. I follow people I’m not friends with, and in turn, people I’ve never met follow me.

What about Google’s Gmail? Its address book, although a prodigious resource, stores every e-mail address you’ve ever encountered, including those random Craigslist purchasers and every spammer who made it over the drawbridge and through its filter.

LinkedIn, the business social connection site, is Facebook’s closest competitor in the mutual-friends arena, but it generally connects people based on work affiliations, whereas Facebook tends to include personal friends, family and professional connections.

As the Facebook community continues to grow by over 600,000 people a day, there is a lot of potential for Facebook to move beyond who we know in common to what we know in common. As I update my status with movies I’ve seen, books I’m reading or news articles I like, these features could help make all kinds of conversation — not just introductory ones — a lot more engaging.