Brands Struggle in the ‘Free’ Economy.

LONDON – From free newspapers to free samples UK consumers not only expect more for less but, increasingly, want something for nothing, creating a challenging market for brands. 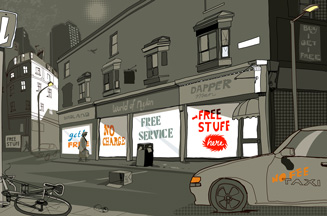 A generation of consumers has grown up expecting to get their music, newspapers, mobile phone handsets and broadband access without paying a penny. Over the past decade a tide of ‘free’ goods and services has washed over consumer markets, thanks to the spread of the internet and the deflation brought about by technological advances and low-cost overseas labour.

This ‘generation free’ is used to being showered with freebies such as laptops when signing a broadband contract or flights when they choose a credit card.

The free economy is overturning the business models of many sectors and hastening the re-invention of some of the 20th century’s most successful industries. This summer, a book by Chris Anderson, editor of the Wired website and author of The Long Tail, will be published, entitled Free. In it he argues that we are entering a new era of ‘freeconomics’ where the trend toward ‘free’ will affect every single sector.

It will be a world in which airlines give away flights, but make money from extras such as in-flight gambling and food, and electric cars are distributed free of charge, while money is made from selling access to recharging points.

Anderson cites the internet as an area where the free economy is really taking off. The costs of digital technology are falling every year, allowing internet services to be run for next to nothing. He also points out that the dominant business model on the web is making money by giving things away. Skype, Google, Flickr and Joost all follow this model.

‘Free’ has long been a misnomer, according to Anderson. In reality it simply means shifting costs around. Gillette began by giving away razors to make money selling the blades. This just deferred the costs, moving them from one pocket to another. Now, however, the internet enables truly free services to flourish.

‘The old form of cross-subsidy means you are going to pay sooner or later. The new form is that a tiny minority of people who really appreciate the product and get value out of it can subsidise it for every-

one else, because the underlying cost of doing things online means you can do it for free,’ said Anderson in a recent interview. So, for example, Google makes money from paid-search advertisers. This tiny group subsidises the majority, which uses the search service for entertainment and educational purposes.

It should be pointed out, however, that while Google is highly profitable, it uses an advertiser-funded model that has driven broadcasters such as ITV for 50 years. Other free web services such as YouTube and Facebook have yet to find ways to profit from their businesses. They are being kept afloat by investors who have faith that they will eventually make money.

Beyond the web, production costs are also falling, in turn driving down retail prices. But there are question marks over the sustainability of some areas of this fledgling ‘free economy’.

to restore premium values to products. Consumers are becoming suspicious of the ‘free’ tag. In supermarkets, buy-one-get-one-free offers have tailed off significantly over the past year as shoppers demand overall lower prices instead.

Meanwhile, the UK edition of Sport Magazine ceased publishing following the collapse of its French parent company. The demise of this free title shows that the ad-funded model of media lasts only as long as the ad revenues keep pouring in. One of the oldest giveaways – free television content in return for ad exposure – is under serious threat at ITV, Channel 4 and Five,as advertising revenues dwindle.

When it comes to dailies, Associated Newspapers’ free commuter title Metro is profitable, but the London evening giveaways London Lite and thelondonpaper are both thought to operate at a loss. Some believe the Evening Standard’s fresh management under Russian owner Alexander Lebedev could revitalise the title and see off competition from the freesheets. Metro International, which produces free newspapers across the world, recently announced losses of nearly £14m for the first quarter of this year and many believe consumers will invest in solid products.

However, ShortList, a commuter give-away aimed at upmarket men, claims to be prospering. Publisher Mike Soutar says the magazine, which has a weekly distribution of 500,000, turned over £3m in 2008 and is on course to reach a turnover of £3m in the first six months of this year. He has no doubts that the free model can thrive.

‘There is a generation of consumers, mostly under 35, who expect good-quality services, information and entertainment and don’t expect to pay for them. Free no longer means cheap – we are in an age of «freemium». If it’s free dross, people will leave it. They will only engage if it is high quality,’ he says.

Crucially, however, media agencies still expect a substantial discount for free magazines. Nonetheless, Sky brand marketing director Robert Tansey believes his brand is proof that people will pay for a service if it is good and offers something they can’t get elsewhere. ‘Freeview has been around for a number of years, but we have shown consistent growth in that time,’ he says.

Sky announced record subscriber figures of 9.3m last month. ‘There is a trade-off between quality and choice. A free news-paper might be OK, but it doesn’t give you the same in-depth editorial coverage as a paid-for paper,’ adds Tansey.

Media is not the only industry where brands are under pressure to offer some-thing for nothing. Upmarket grocery chain Waitrose has just axed charges for its home-delivery service. Managing director Mark Price says research among shoppers showed more than 80% came out in favour of scrapping the delivery charge, about £5, over having the money accrued from the charge invested in general price cuts.

‘Part of the appeal is ease but it is also transparency. They know they have to pay one way or another, but with free delivery they know where the saving is,’ adds Price.

That said, Price is cautious about claims that the world is entering some kind of new free paradigm. ‘Free has always been part of marketing from Yellow Pages to ITV and people will continue to use it,’ he says.

The desire for free products has increased as the downturn bites, according to Andrea Burchett, AirMiles director of relationship marketing. There has been a four-fold increase in people joining the scheme over the past year. This may be partly down to the introduction of completely free flights. Previously, customers still had to pay tax and fees on flights, which she believes acted as a disincentive to joining the scheme.

‘Offering free flights is a simpler marketing message than saying the flight is free but you still have to pay the extras. In customer research, it was clear that what people wanted was the free flights, it is a concept of something for nothing,’ she says.

There is also a resurgence in the classic free model of sampling, according to Chris Sanderson, founder of Future Laboratory. He points to the success of Sample Lab! International, the global store chain where consumers pay a small annual fee to test new products in-store and at home.

There is no doubt the free economy is taking off, particularly on the web, but it is far from clear whether the free business model is sustainable long term. The Gillette rule of marketing – ‘give a sucker a razor and he’s yours for life’ – has lost its saliency in the digital age. Now savvy consumers are likely to be getting their free razors from a plethora of companies and a simple gift does not inspire life-long brand loyalty.

Offering something for nothing has its limits, because consumers will still pay for exclusive content and high-value products. It is also questionable whether ‘free’ exists. Someone, it seems, always ends up paying.