Apps Boom as Companies Seek a Place on Your Phone 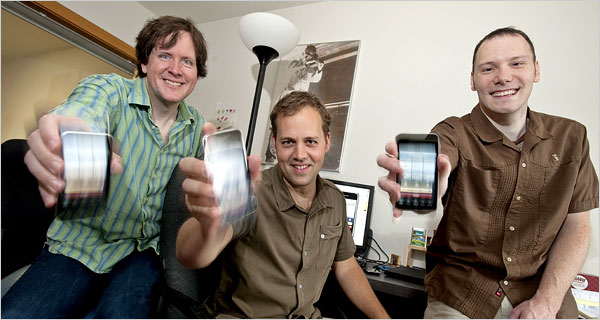 The co-founders of UrbanSpoon. From left, Patrick O’Donnell, Ethan Lowry and Adam Doppelt.

Developers of programs for the iPhone have already managed to make a decent living selling hundreds of thousands of copies of games from their living rooms or garages.

But now, a new way to profit from writing software for the iPhone is emerging: Sell the apps, then sell your company.

With the number of downloads through Apple’s App Store topping one billion and more than 40 million iPhones and iPod Touches sold since 2007, an increasing number of companies are seeing the mobile industry as a source of sustained revenue. Recently, IAC/InterActiveCorp, the Internet media conglomerate founded by Barry Diller, and Amazon.com, have bought app developers. Smaller companies have begun to assemble properties.

Since Apple showed that new apps sell phones, the market for apps is expanding quickly. Palm, Research in Motion, Nokia and Microsoft are all building app stores to work with phones running their operating systems. Apps can also be built for phones running Google’s Android software.

Most of the action is still in iPhone apps, which is what makes Apple’s Worldwide Developer’s Conference this week in San Francisco of interest to developers and potential investors.

Developers will be showing new products running on Apple’s latest software, which allows users to buy subscriptions to applications and easily buy add-ons like access to higher game levels or additional city guides. The potential for added revenue should increase interest from buyers looking for acquisitions.

“There’s going to be a lot more interest in iPhone applications after the upgrade,” said Greg Yardley, a co-founder of Pinch Media, a mobile analytics firm. “We’re going to see some really neat business models emerge because of the new ability to sell virtual goods.”

The increased interest in app developers is being driven by companies seeking to build cellphone apps for their products or services. They see it as a way to reach beyond the Web for consumers. Though many apps are free, the willingness of people to pay 99 cents or more for one gives companies hope that apps may be a more reliable source of revenue than Web sites.

“Companies are asking themselves, ‘How can we get on the iPhone?’ ” said Matt Murphy, a partner at venture capital firm Kleiner Perkins Caufield & Byers, which maintains a $100 million fund devoted solely to investing in start-ups creating apps for the iPhone. “Instead of trying to organically create their own property, they’re looking at applications with traction and cherry-picking the ones that seem like a good fit.” (A polished, professional iPhone application can cost around $50,000 to produce.)

With an instantaneous and established presence on the iPhone platform, he said, a company could tap into a stable, loyal fan base. For a big company that is trying to go mobile, and quickly, “those few million users are almost more valuable than the property itself,” he said.

That was the approach taken by IAC, which has more than 35 Internet-based companies, including Ask.com, CollegeHumor and Evite. Last month, the company bought UrbanSpoon, a start-up based in Seattle that recommends nearby restaurants, for an undisclosed sum. It is one of the App Store’s most popular products, having been downloaded close to five million times.

“The iPhone is a big part of our mobile strategy,” said Leslie Cafferty, a spokeswoman for IAC. “It takes a lot to invest in developing an application. It was much more appealing to pick one up.”

CitySearch, another of IAC’s properties, first worked with UrbanSpoon to syndicate advertisements and reviews through the start-up’s Web site. When the iPhone application made its debut last July, it was “the icing on the cake,” said Ms. Cafferty.

For the three creators of UrbanSpoon, it was “partially opportunistic” to be bought by a larger company, said Ethan Lowry, one of the founders. “It let us think on a grander scale of the services we can offer.” And it offered stability, he said. “The security of a larger company has taken some of the financial stress out of the situation,” he said.

Amazon, with its Kindle electronic book reader, looked at phone apps as a way to expand the market for the e-books it sells. In late April, Amazon bought Stanza, a software service that allows users to browse and buy from a library of 100,000 books through a phone.

But it is not just larger companies beginning to see promise in the popularity of the phone and high demand for its programs.

Tapulous, a start-up in Palo Alto, Calif., bought a game called Tap Tap Revenge from its developer, Nate True, in July. The game, patterned after video games like Guitar Hero that challenge players to keep rhythm with popular songs, has been downloaded by one out of every three digital shoppers in the iTunes App Store, according to market research firm comScore.

“We’re very excited to connect with people at W.W.D.C. who have interesting ideas and applications in the music gaming space,” said Andrew Lacy, the chief operating officer of Tapulous.

Other companies are making a business out of acquiring raw programs to redesign, polish and release into the App Store. For example, Ngmoco, a video game start-up based in San Francisco devoted solely to publishing games for the iPhone and iPod Touch, recently bought the quirky, colorful puzzle game Rolando designed by a British developer, Simon Oliver.

“When we built our company, we decided the best model was to harness interesting developers and bring their projects to market,” said Neil Young, the chief executive at Ngmoco. Mr. Young said the company also develops games in-house, but is always reaching out to developers to see what they are working on next.

So far, their approach appears to be working: many of their games rank highly in the App Store’s most-popular lists. The company has four more games to be released in the next two months and 15 new games under development, including several sequels to Rolando.